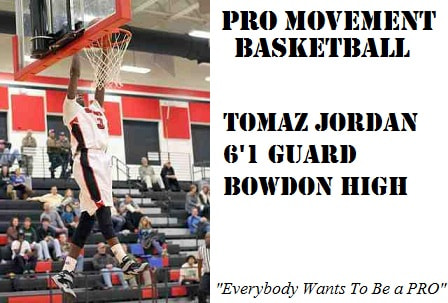 Tomaz Jordan is one of the most well-rounded players in his region and consistently gets better each season. As one of Bowdon’s captains, he has lead the team for the past 3 seasons at the point guard position. After this past season, Tomaz earned the “Life Saver” award, which is the team’s most “clutch” player. He also earned a spot on the All-Region and All-Area team, concluding his senior campaign. Tomaz does everything well on the court, averaging 9 points, 5 rebounds and over 5 assist per game. In addition to his stats, he is a very good defender and has the ability to create turnovers and extra possessions for his team. He is also a great leader and has a passion for getting his teammates involved and making them better.

The most attractive feature of Tomaz is he makes his teammates better, which will translate to the college level well. Tomaz is a team first player who would rather get an assist than score.  Although, a capable scorer, Tomaz is a pass first point guard who knows how to get everyone involved and playing with maximum effort. He is a well-rounded player who does everything well and can mold his game to what the team needs. His unselfishness is admirable and makes him a great teammate and player to have in the locker room. Tomaz would be a great addition to any roster and would improve any team he is a part of. He will continue to improve due to his impeccable work ethic and passion for the game.