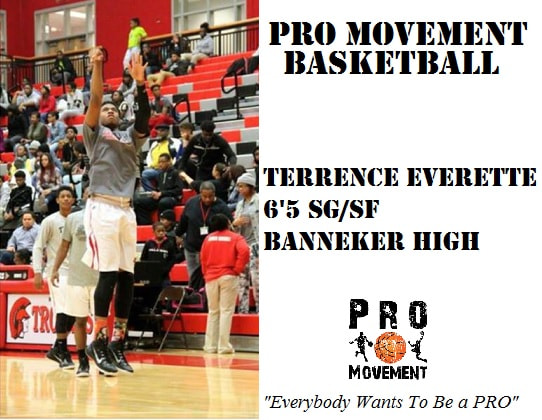 Terrence has been the focal point for Banneker High School for the past two seasons. Expected to score, rebound, get teammates involved and lead, Terrence has done everything but disappoint. His production in every statistical category has improved and he has developed into a great leader. Terrence is a very dangerous player on the offensive end because he can score in various ways. But, what makes him a special player is his length and athleticism, which allows him to guard multiple positions, get into the passing lanes and rebound. In his senior campaign, he averaged over 18 points and 5 rebounds along with 3 assists. Terrence is one of the most well- rounded and diverse players in the state of GA. Standing 6’5″, 185lbs, he causes match-up problems for a lot of opposing wings. The most exciting part is that his best days are ahead of him.

Terrence’s ability to affect the game in various ways definitely shows how bright his future is. One of the most diverse players in the state of Georgia, Terrence is a dangerous player who would improve any roster. His length and quickness allows him to be a great defender. His various ways of scoring the ball  makes him quite the nuisance for opposing teams. He attacks the rim with a fierce attitude and finishes with contact.  Terrence ability to impact the team on the offensive and defensive end makes him a unique and special player.  At the rate he has improved, he is on track to become an outstanding player at the collegiate level. Terrence has the talent and rare athletic ability that separates him from other wings which makes him a rare commodity to add to any roster.