Mason & the Mt. Bethel Christian Academy Eagles finished the 2017-18 season with a record of 28-7 (11-0 in Region play). In the process, they captured their 2nd consecutive GICAA I-AA State Championship. Mason carried that momentum over into the Spring & Summer AAU season. He has put in the work to make himself a better player. He’s bigger, stronger, and more explosive now. From a skills perspective, Mason has expanded his game – he’s a consistent threat from the three point line and is capable of getting to the rim and finishing with either hand. College programs in need of a hardworking, tough, WINNER need to take a look at Mason Venable. The #PRO staff will have our eyes on Mason and Mt. Bethel throughout the 2018-19 season.

Mason Venable is looking forward to his first season at Mt. Bethel Christian Academy (GA) for the 2017-2018 season! The powerhouse program went 25-4 last season, going undefeated (11-0) in region play & winning the 2017 GICAA AA-I State Championship. Mason brings that hard-nosed competitive spirit to the already top-notch program. The 6’3 forward has good athleticism and the ability to block shots. Venable plays much bigger than his height may suggest and uses his physical toughness to compete against taller & bigger players. He is a great teammate and willing to do whatever it takes for his team to win games. Venable plays AAU with the Georgia Kings. 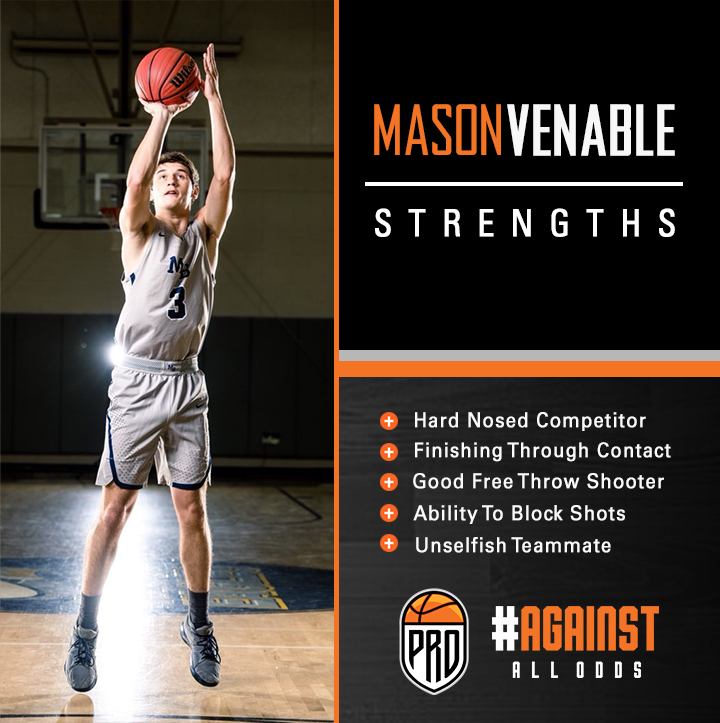 Mason has the potential to be a valuable asset to a college team for various reasons. First, Mason does all the intangibles that may not show up in a box score. The hustle plays that win games & championships, that often go overlooked, Venable thrives in those situations. Also, Venable continues to grow and develop his overall game. The #PROMovement staff believe is a very intriguing prospect for college coaches to take a serious look at this season. Venable is a high character player that takes his academics very serious. Currently, earning a 3.2 GPA through his first three years of high school. Venable plans to study Sports Management in college.