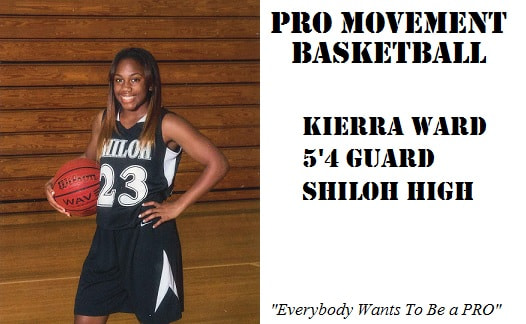 Kierra has had an impressive career since her start on the Varsity team since her freshman season. Year after year, she has spent her summers in the gym getting better, improving her production each season. During, her senior season, she led Shiloh to its first GHSA playoff appearance in 7 years. Kierra also captured the “Gwinnett Tip-Off Club Player of the Month” Award twice during her career, in both her Junior and Senior seasons. Kierra is not only gifted on the basketball court but she lettered in Volleyball for Shiloh as well. She played AAU basketball with the Georgia Hoopsters. Kierra is as successful in her academics as she is in basketball. She has a 3.53 GPA and scored 1430 on her SAT.

Kierra has a bright future at the collegiate level. She is a solid guard who does everything well. She defends with passion, has a good shot, and involves her teammates. What her coaches and teammates love about Kierra the most is her unselfishness. Regardless of what is being asked from her, she makes the necessary sacrifice for the team to win. She is the ultimate teammate who puts the team first. She will make any team better and also brings leadership to the locker room. Kierra is as successful in the classroom as she is on the court. She has proven to be an excellent student and will support and encourage her teammates to do so as well.