Jawdat continued to prove the quality prospect he is, concluding his junior campaign. He excelled in the classroom setting & put in the hours to improve his game on the court. Also, improving his strength mentally & physically, you can see the growth/maturity of Jawsdat as an over prospect.

Jawdat Razeq II plays in one of top & upcoming programs in the state of GA, Mountain View High School. A couple of seasons ago, most were not too familiar with the school in Lawrenceville, GA. After a Sweet 16 Appearance & Head Coach Roy winning the Region Coach of the Year (2016-2017 season), Mountain View is now on everyone’s radar. Jawdat has proven to be leading that next wave of talent at Mountain View High. He is heading into his junior season after playing very well his freshman & sophomore seasons on the freshman & JV team. He is a leader on an off the court. Jawdat excels in the classroom as well, every year receiving various scholar & academic awards.

*9th Grade Player Of The Year

*JV Player Of The Year

Jawdat has been selected to the Gwinnett Student Leadership Team for the next two years! Congratulations Jaws! 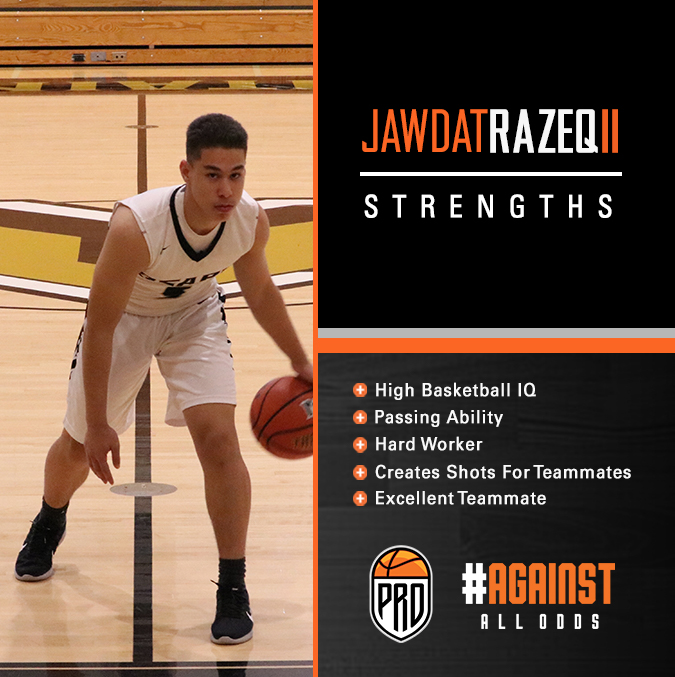 The #PROMovement staff has seen the transition & growth is Jawdat’s game over the last year. The improvement in his outside shooting ability, creating off the dribble & his more aggressive style of play has definitely been noted. Along with, a year of being in the weight room, you can see the development of his body and gained muscle. Jawdat is poised to have a nice senior season with the Mountain View next season. Look for him to play an important leadership role at the point next year for the Bears.

Jawdat has a bright future ahead of him for a few reasons. #1: His work ethic and attention to detail. He understands his areas of improvement and what he needs to focus on to get to the next level. Most importantly, Jawdat is a leader on the court & in the classroom. Jawdat is a high character young man that understands his role & plays unselfishly. As Jawdat continues to develop our #PROMovement staff feels he will be a solid & consistent contributor for Head Coach Roy and the Bears.