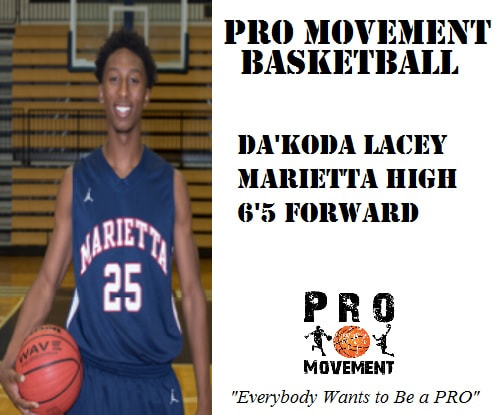 Da’Koda Lacey has been a well-kept secret for the past few seasons at Marietta High School. He had a great senior campaign that earned him a spot on the All-Region Honorable Mention Team. Da’Koda is a well- rounded player who can contribute to the game in various ways. Whether it is scoring when needed, rebounding the basketball, finding the open team mate or dunking the ball in transition, Da’Koda has his print all over the game by the time the buzzer sounds. On the defensive end, Da’Koda can guard multiple positions due to his quickness and athletic ability. He is a very long defender who causes many deflections which lead to opportunities in the open court. His coaches and team mates speak highly of him and the intensity he plays with night in and out.

Da’Koda is a very unique player who has a lot to offer at the collegiate level. His versatility and athletic ability are two of his strengths that will translate well at the next level. Da’Koda has natural talent that you cannot teach and the work ethic that enables him to improve his overall game. Another reason his ceiling is high is because of his work ethic and drive to be a great player. Whether it’s going in early to practice to get in the extra shots or working out in the weight room after a tough loss, Da’Koda has proven to do whatever is necessary to become a great player at the next level.