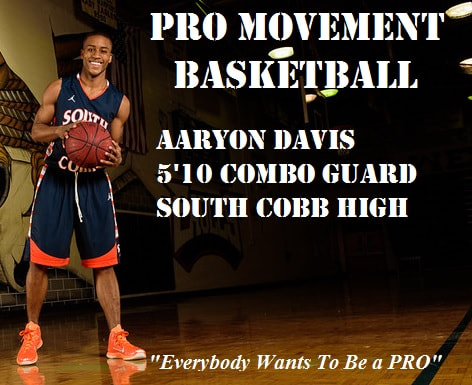 Aaryon is one of the most explosive players in the state of Georgia. His athletic ability is unmatched. With a vertical of 43 inches, labeling him as a high-flyer would not be nearly enough to describe Aaryon’s leaping ability. If you talk to any of his teammates or coaches his athletic ability is the last thing they talk about. His teammates and coaches love the true leadership he demonstrates not only in games, but in practice.  For the past two seasons Aaryon has been the team captain and led by example. Aaryon has a gift of getting to the lane and finishing with contact over taller players. Aaryon has been a key piece to the success of South Cobb High School in the past two seasons. While his athletic plays catch the attention of most fans, he brings much more to the table than high flying dunks. Aaryon has had a great high school career and continues to improve year after year.

Aaryon’s potential at the college level is very bright for multiple reasons. First, not many guards have the athletic ability that Aaryon has. Whether it’s on the defensive end or offensive end, Aaryon can make game changing plays that could swing the momentum of a game. He is a spark plug with an aggressive defensive tenacity that can disrupt an offense. The attitude and infectious spirit Aaryon plays with will definitely motivate his teammates to play harder and tougher. The bottom line is Aaryon is a player you want to have in your locker room. His drive and passion motivates him to continue to work on his game and get better. Aaryon has the talent and rare athletic ability that separates him from other guards, which makes him a unique commodity to add to a roster.